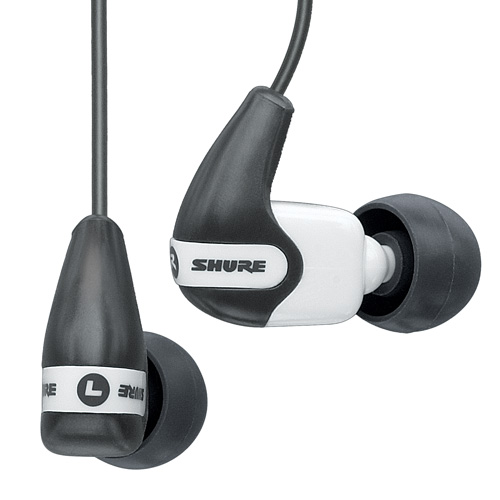 Why I Chose the Shure SE210s

I’ve been on a quest to find the perfect headphones. Along my way I’ve tried stock headphones that came with the various i-devices over the years, from cheap to mildly expensive. I’ve tried to go low end and inexpensive wherever possible, but started into the upmarket space when I got a Target gift card and threw down for some Bose in-ear headphones. These are great sounding, had everything I wanted in terms of comfort but fell out walking, exercising or moving in any way. Bose sent out some attachments to make them a little more reliable in terms of staying in the ear, but it didn’t work to well. I still use them as office headphones when Heather needs quiet or I want to listen to something that Heather doesn’t want to hear or is different stylistically (not necessarily Steely Dan-related). They are great for this because I can pull them out quickly and I can still hear ambient room noise, so carrying on a conversation can still happen.

A few years ago, I had another gift card and bought some Philips noise canceling earbuds that were in the $50 range at the time. They sounded great when they were in place, but they hurt for long periods and would work their way out if I was moving. Worked ok on planes, but the discomfort and actual noise canceling functions weren’t great. On our recent trip to Austin, I decided that since the Philips were four years old, and I had recently lost my iPhone compatible V-MODA vibe duos, it was time to look at options.

I looked at over the ear noise canceling headphones. Sound great, but are bulky for travel and don’t work with the iPhone (unless I use an adapter). Plus, I’m not likely to wear them any time except on a plane. Wouldn’t want to work out with them. And they are expensive ($300-$350 US; even higher cost for more exotic ones). So I ruled out the Bose QuietComfort series. Too bulky. Too expensive.

As I wrote recently, I like the sonic footprint of my vibe duo headset, but wanted something with a better sound isolation/noise canceling function. I also wanted iPhone functionality, but was willing to buy an adapter if necessary. Shure makes one that works with any heaphone, so I figured I could eliminate the need for an inline microphone with clicker from my search and focus entirely on comfort, sound and noise canceling quality.

From there, the options narrowed considerably. I didn’t want to spend over $200, because that just seems insane. At least $50 more insane than I want to be. Especially since once you hit a certain point, the returns are negligible. I’m not listening to music in pristine environments. I’m listening to music in an office or airplane and maybe outside working in the yard or walking the dogs. I’m also not listening to virgin vinyl recordings done from a floating platform in zero gravity at 100,000 miles beyond the Van Allen belts and then digitized on a neural net sponsored by JPL with software from NYU researchers or anything related to the unclassified portions of the time machine project. My musical tastes span genres and eras. So the production value varies greatly. From indie demo MP3s at 128kbps to AIFFs from remastered CDs and original tracks… I don’t need studio monitors. I need a pair of just higher than middle of the road nice in-canal earphones. Sounds very sexy.

I bought Shure SE110s to replace my lost Vibe Duos. The SE110s are lacking. I don’t know if I got a bad set, but I tried every attachment that comes with the set to get even a decent level of bass. I squished the foam earplugs and held it in my ear for at least 10 seconds until the foam expanded. Still lacking in the bass department and not a good representation of Shure as a brand. I’ve used a ton of Shure products over my life as a musician, recording engineer and PA dude. Shure is one of the premiere go to brands for dynamic microphones that are rugged and last a lifetime. I almost gave up on trying any other Shure earbud products on the negative experience alone.

Somewhere I had seen or read that the SE210s were markedly better sounding and for only $50 more put the earbuds in line with something costing double or triple the $150 US. I’m still searching for the link because I can’t find it as of this writing. Since the Apple store has a great return policy, I decided to return the SE110s and after a lot of back and forth and reading of product specs and online reviews. I debated over throwing down for the SE310s, but $249 seems rich and from most reviews, there isn’t much of a difference between the SE210s and SE310s. After talking with a store rep and confirming that if the SE210s sucked, I could return them for either a refund or an exchange and additional charge for something else.

Upon first insertion, it was clear that the SE210 is a much better product than the SE110. I listened to a quick selection of tracks from my iPhone using the factory-installed foam earpieces on the SE210s. Everything from jazz to electronic, dance to indie. I had found my replacement earphones. I listened to stuff mixed before digital music came along. Back in the day, engineers would bump up the treble/high-end on the final mix/master process because vinyl records lost some high end on playback. You can hear this on any track mixed before the mid 80s and without being remastered onto CD. Without any EQ settings in iTunes, I could immediately hear a level of detail and clarity in the music that neither the Bose nor the Vibe Duos had. It’s just a little cleaner and is highly subjective. Another listener might say that I was full of it and tell me that I’m insane to spend $50 more for a subjective possibility rather than a concrete proof. I could prattle on about specs like frequency response and dbs and how much is removed by using foam versus silicone. None of it matters too much to me. I can hear details in the music and still have my low end and sonic isolation. Done.

I have the foam pads (similar to earplugs that you squish and insert that expand inside the ear) that I can wear for hours without them falling out and with a substantial blockage of background noise. I’ve tested them with Heather yelling at me, with the vacuum running and outside with the dogs (Coco was barking and I couldn’t hear a damn thing but Charlie Haden’s bass on his duet with Pat Metheny). The earbuds also can produce all the insane low end from an artist like seizure drum n bass knob twiddler µ-Ziq’s Lunatic Harness as well. If I want, I can leave the earth behind and feel the groovy love of music deep inside my head. There is also a track called “Goodbye, Goodbye” off of µ-Ziq’s 1999 masterwork, Royal Astronomy. It’s a real woofer tester. Super super low end and then clicky high end bits that will test any setup to the extreme. It is awesome. And it sounds spectacular on the SE210s. So yes, I’m gushing.

Three things that won’t be drawbacks for me, but might for somebody else: 1) The cord assembly is in two parts and is bulkier than average. It feels solid to me, but might be a deal breaker; 2) The earphones go inside your ears, deeper than most earbuds. This takes some getting used to; 3) The default insertion has the cord from the earphones going up instead of down. On the plus side, you can look like Thom Yorke live with wires sticking out should you choose. One could also tuck the wire behind the ear and minimize the sounds caused by stuff like clothing and body parts touching the wires transmitting bumps to the ears. In practice, this isn’t as bad as it might appear. But it could be a deal-breaker for some.

The real test is going to be flying with these things. So far, I have high hopes. This is one of the better purchases I’ve made and I’m pretty stoked to have this option of audio reproduction in the arsenal.

Best ever: the wife can SCREAM at me and I hear absolutely nothing. Talk about hovering in zero-gravity beyond the Van Allen belt.

p.s. anybody from Shure or anywhere else want to send me a pair of higher end earphones to compare? Review units accepted gladly: djblurb [at] blurbomat [dot] com.

Always making it harder than it has to be

I Can Quit Any Time